Chris Hemsworth is one of the most bankable celebrities on the planet. Over the last decade, this Aussie actor has emerged from Down Under to conquer Hollywood and take his place as the sexiest man on the planet.

It’s not just his natural good looks that have catapulted him into the stratosphere. He’s also built a body to envy, allowing him to play such iconically powerful characters as Thor with absolute believability.

Chris was born on August 11th, 1983 in Melbourne, Australia. He has two brothers, Luke and Liam, who are also actors.

Chris’s family moved around Australia throughout his early years and he was extremely active in a variety of sports while in school.

After graduating from high school, Chris began auditioning for TV roles. His first role was in the Australian soap opera ‘Home and Away.’ In 2007 he began searching for roles in the United States.

His break came in 2009 when he was cast as Captain Kirk’s father in the J J Abram movie ‘Star Trek.’ Later that year he played a ‘thuggish backpacker’ in ‘A Perfect Getaway.’ Both performances received critical praise.

In 2011 Chris entered into the Marvel family and assumed the role of Thor for several movies. He also starred in a string of other movies including the horror film ‘Cabin in the Woods’, the comedy ‘Vacation’, and the Men in Black spin-off ‘Men in Black: International.’

In early 2010 Chris began a relationship with Spanish actress Elsa Pataky and they were married in December of that same year. Their first child, India, was born on May 12th, 2012, and then in March of 2014 they had twin boys. In 2015 the family relocated from Los Angeles to Byron Bay, Australia.

In 2011, Chris was cast as Thor in the Marvel Cinematic Universe. The first movie that he appeared in for the franchise was ‘Thor’, released later that year. He competed for the role with co-star Tom Hiddleston, who ended up playing Loki in the movie. Chris put on 20 pounds of muscle for the role. The movie went on to gross $449.3 million worldwide and Chris’s portrayal received widespread praise from fans and critics alike.

In 2012 Chris reprised his portrayal of the God of Thunder in the movie ‘The Avengers.’ ‘Thor: The Dark World’ was released the following year, it being the 8th movie in the Marvel superhero franchise. ‘Thor: Ragnarok’ was released four years later in 2017. The next movie in the series, ‘Thor: Love and Thunder’ is due for release in 2022.

For his role as Thor, Chris and his trainer focused on a bodybuilding-style 5 day split training program. There was a definite focus on beefing up the size and definition of Chris’s arms and shoulders since he would be spending most of the movie with his arms exposed.

Chris was amazingly consistent in his training, in fact, he never had a day off during the 6 months that he spent preparing for the role. In addition to his Monday through Friday workouts, he ran on the weekends to help bring a muscular, lean physique to the big screen.

Chris Hemsworth is currently trained by his life-long friend Luke Zocchi.  Chris has been working out with Luke since his ‘Home and Away’ days and he is the man who helped transform him into Thor, the God of Thunder. Chris also trained with former Navy Seal Duffy Gaver during his prep for Thor.

Here’s what Luke Zocchi said when asked about Chris:

“I’ve known Chris since we were six. We were friends all through high school. I used to do some amateur boxing. Chris would come down and watch me spar in the ring. I’d always say, ‘Jump in!’ and he’d quip, ‘I can’t get in there, I’d ruin my face!’

Chris is really passionate about fitness. It’s not like he just does it for a job. He does get superfit for roles, but he really enjoys being healthy himself. So many people ask him, ‘How did you do this?’ How did you do that? I just think he wants to share the things he’s learned along the way.”

Chris stuck to a basic muscle-building diet during his 6-month preparation for Thor. He ate plenty of lean protein including chicken, red meat, and fish along with a moderate amount of complex carbohydrates such as green, leafy vegetables and low glycemic index starches.

Chris ate every three hours, making sure to get in 25-30 grams of protein with each meal. He consumed two protein shakes daily to help achieve this goal.

Chris took the following supplements during his training for Thor in order to enhance his focus, strength, endurance, and recovery:

Chris followed a split routine to pack on 20 pounds for his role in Thor. Here is the arm and shoulder workout that he followed:

To get in shape for Thor, Chris ate lots of protein – particularly chicken, steak, lamb chops, and fish. Protein is absolutely essential for building a body like Chris Hemsworth, and you should aim to consume 2g of protein per kg of bodyweight. Other foods rich in protein include: eggs, turkey, mince, protein shakes (Chris consumes hemp/pea protein) and protein bars.

Alongside eating lots of protein, Chris also eats lots of complex carbs like brown rice, and sweet potatoes. Finally, he claims to start each day with a greens shake – which is made up of 5-6 different leafy greens, veg, low GI fruits, seeds, nuts and a small amount of sea salt to aid hydration.

To transform into your own version of Thor, you need to commit to training hard and heavy. You will notice from the workout sample above that Chris used a high set, pyramiding rep scheme on his heavy basic exercises.

Take the military press, as an example. Chris did 7 sets, pyramiding down from 10 reps on the first set to 3 reps on the last two sets. Each set he would increase the weight by a few pounds.

To be able to keep increasing your strength on the basic exercises, you will need to give yourself enough rest between sets.

On his heavyweight exercises, he would rest between 2-3 minutes. You should do the same thing.

When it comes to the non-pyramiding sets, you should decrease your rest between sets. This will keep your metabolism revving while you are building and shaping your muscles. Rest between 30-60 seconds between sets on these exercises.

Chris would often enhance the intensity of his workouts by doing supersets. This is when you do an exercise and immediately move to another exercise without any rest between sets.

In 2019 Chris released his fitness app Centr. In an interview with Muscle and Fitness magazine, he said:

“I believe we all have untapped potential, and we all need support to achieve our goals. Centr puts the world’s best in the palm of your hand to help you develop a healthier body, a stronger mind, and a happier life.

The app represents a collaboration by top trainers, chefs, and wellness experts to provide an all-encompassing training and fitness lifestyle solution.”

Check out the Centr app here. 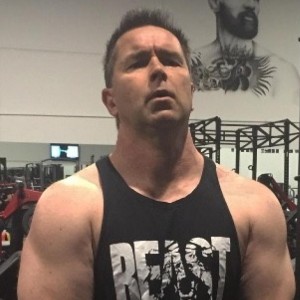 For the past five years, I have been a full-time fitness writer.  I also love to write about history and have written more than thirty books on the great battles throughout history. I live in sunny Tauranga, New Zealand with my wife of 33 years, Shelley.

Is Tom Hardy on Steroids?

Does Mark Wahlberg Take Steroids or Is He Natural?

Is Conor Mcgregor on Steroids?