In the 1976 Olympic Games in Montreal, the Soviet Union weightlifting team dominated the competition, winning 7 of the 9 available gold medals. Consequently the lifting world wanted to know the Russian’s secrets…which was when the 1976 USSR Weightlifting Yearbook was published.

Over 40 years later, this remains a very popular training routine, which has helped countless guys and gals smash their squat PR’s with ease. Thank goodness the Russians spilled the beans, otherwise we’d all still be playing catch up.

The Russian squat routine is primarily designed to increase strength, however with this routine overloading your muscles – users can also expect to see noticeable muscle growth.

This is a no nonsense program that doesn’t promise miracles, but instead has proven to increase leg strength in almost every user that’s tried this routine. The beauty of this routine, is that it works for almost every lifter – including intermediate lifters or experienced competitive powerlifters.

It’s also worth noting that many users report their 1 rep max increasing by more than 5%, by the end of week 6. Some may notice as much as a 15% increase, and more newbie lifters may experience even further strength gains.

You can expect some DOMS in your legs, so be careful walking down the stairs the morning after a workout. Get ready for your testosterone levels to spike, due to more frequent squatting days. After all, the squat is the king of T-boosting exercises.

Some people report noticeable fat loss from the russian squat program, which could be due to fat-burning hormones (such as testosterone and HGH being spiked), or/and your metabolism going up a few notches from the intensity of these workouts.

By the end of this workout routine, you will be a changed man. All of a sudden hair will be on your chest, your girlfriend will get excited at the smell of your manly pheromones oozing from your pores; and you’ll generally just feel like Tom Platz.

Disclaimer: You may develop squat withdrawal symptoms at the end of these 6 weeks, where you’ll have dreams longing for the squat rack and have panic attacks at the thought of training arms again.

Have you tried the Russian squat routine? Let us know of your gains in the comments below. 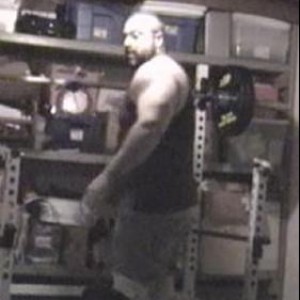 Steve Shaw is the original founder of Muscle and Brawn, an experienced powerlifter with over 31 years experience pumping iron. During competition he’s recorded a 602.5lb squat, 672.5lb deadlift and a 382.5lb bench press.