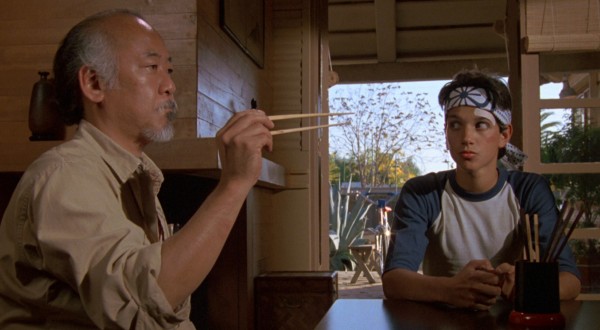 Do you spend a lot of time helping other lifters?

I’m going to share a training secret with you that will help you figure out who is serious and who is going to waste a lot of your time. I call it the Mr. Miyagi test.

It is guaranteed to work 95% of the time.

There are 2 parts to the Mr. Miyagi test: one for dieting assistance and one for training assistance. Before I explain them, let’s address just who in the world Mr. Miyagi is.

No, Mr. Miyagi wasn’t a bodybuilder. He was the sensei in the Karate Kid movies.

When Daniel came to Mr. Miyagi seeking advice, instead of teaching him Karate right from the get go, the sensei gave him household chores. These duties included painting a fence and waxing a car. Part of the reason Mr. Miyagi did this was to test Daniel’s drive to learn.

Over the years I have invested a lot of time helping beginners set up eating plans and training programs. At least 80% (or more) or them fizzled out quickly. They immediately made excuses or wanted changes.

I can’t remember one of these “needy” lifters ever becoming notably successful.

On the other side of the fence you have the trainees who took my requests and ran with them. It didn’t matter what I told them to do, they did it. These were the guys that ended up being successful.

Not all of them reached the pinnacle of success. But if you analyze the numbers, if doesn’t take a rocket surgeon to figure out that the vast majority of those that were successful under my tutelage simply did as I told them to do.

So what does this have to do with Mr. Miyagi? It’s all about testing those who seek your advice to see if they are serious.

As I mentioned, I utilize a couple of tests to see if someone is serious about getting results. For lifters seeking help with an eating plan, the test is simple:

For the next 2 weeks eat “X” amount of calories each day, and weigh yourself after urinating each morning. Log these weights and come back to me after 2 weeks so we can analyze the data and set up an appropriate eating plan.

If a lifter follows through and does this without stumbling or making excuses, there is a strong likelihood that they are serious and ready to do anything it takes to get results. If they ask for changes, fail to weigh themselves most days, or fall off the eating plan on quite a few days, there is a strong chance that they are not ready to commit.

Now I can’t say for certain that 100% of those who appear ready won’t let you down, and vice versa. I can say with confidence that it is rare to find someone who will rebound and commit to a diet after they failed to adhere to this 2 week test.

Whether you choose to help them is your call.

I have a similar test when it comes to training. A lifter is provided a very easy to follow 3 day per week program. This workout system does not include any fancy exercises, but it does focus on heavy, compound movements and progression.

If a trainee comes back asking for changes, then it’s a huge red flag. No one should require changes to me made to a lower(ish) volume, simple and straightforward muscle building workout. If they can’t handle a basic program, well…

Something will always be bothering them.

They spend the majority of their time thinking about strains or pains, worrying about deloads, overthinking programming, etc. It is also likely that they will pester you to no end with special eating plan demands.

And then, after making 22 changes in 3 weeks, and after thinking you FINALLY have the perfect program setup for them – they will ask you about Wendler’s 531 or Starting Strength.

Be A Wise Sensei

It’s time to be a wise sensei. You only have so much time in the day. When someone asks you for assistance, give them a plan to follow for 2 weeks. If they can’t hang with the program…

You are not being cruel. Some people are simply not ready. They may need a stiff kick in the pants from reality to wake them up.

Don’t be a fool and think you can motivate anyone into “wanting it.” You can’t.

Most people like the idea of results, but won’t commit to the process. Why do you think every home in America has a treadmill that also doubles as a clothes rack?